iPhone 7 under review: Time to upgrade?

Every September Apple releases the latest iPhone product line. This year it was the turn of iPhone 7 and iPhone 7 Plus and now it is the best time for an iPhone 7 Review!

We will take a closer look at iPhone 7 specs, features and technical information in this iPhone 7 Review.

Read this iPhone 7 Review article and decide for yourselves, if it is the same, as many are claiming, with iPhone 6s and if it is better to wait 11 months more and get the iPhone 8!

After rumors and speculation, iPhone 7 and iOS 10 are finally released. Of course, iPhone 7 brings us major performance improvements and at the same time, minor changes to the original iPhone’s form. Unfortunately, many aspects of iPhone 7 disappointed the iPhone community and we all admit that some of the new features can become really annoying. Without any further delay, let’s get started UnlockUltrasnow iPhone 7 review!

The best part of iPhone 7 review is the performance improvements.

iPhone 7 is the first iPhone with a quad-core processor and the two of them are used for performance and at the same time the other two for efficiency!

You can also manage which cores are in use, and it is really important to mention that the two efficiency cores consume only a fifth of the power.

Despite cores’ management or economic power usage, the battery performance isn’t so much improved. Apple officially claims the iPhone 7 can take

You can check out here how to make your iPhone battery last longer!

Apple A10 Fusion and iPhone 7 Review

A10 Fusion is surely a powerful quad-core processor and without wasting your time in technical details take a look at the Geekbench scores between iPhone 7, iPhone 6s and MacBook Air 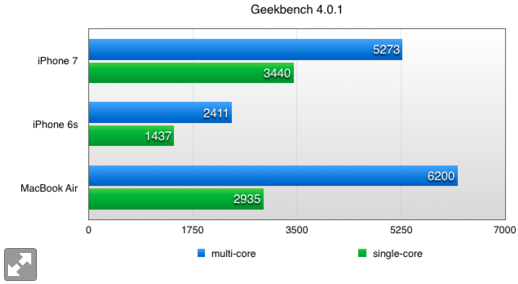 You can easily see how much better iPhone 7 performs than iPhone 6s and in fact, it is almost like MacBook Air. 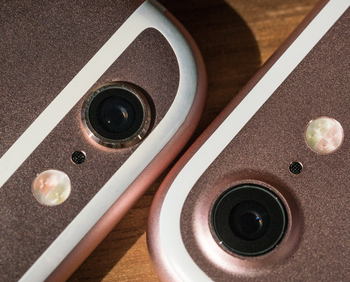 The front iPhone 7’s camera, also known as the FaceTime camera is also improved from iPhone 6s 5 megapixels to 7 megapixels but the f2.2 aperture remains the same.

If you are a fan of selfies, iPhone 7’s front camera will make you extremely happy and you can also use FaceTime camera for 1080p video recordings with improved low-light performance.

iPhone 7 starts with 32GB storage room and continues with 128GB and 256GB versions. Of course, the 256GB iPhone 7 has massive storage and doubles the until now 128GB iPhone 6s but I can’t really tell if someone needs so much storage room on a mobile.

As it was speculating, Apple removed the analog headphone port and added a second speaker. Now you can enjoy stereo sound while holding iPhone 7 in landscape mode.

In my opinion, stereo sound for a mobile in not a big deal but I must admit that iPhone 7 is ”louder” than iPhone 6s and this is what makes the second speaker count!

Until now iPhone 7 Review was mostly positive with iPhone 7 new features. But I can really say that I like the new Home button!

The Home button is not the traditional separate button anymore but instead it is fused with iPhone 7 front side! This helped the iPhone to become more waterproof than ever. At least, you can find it at ease thanks to the button’s slight indentation and Touch ID’s marginally raised ring.

You can no longer hear of feel Home button’s ”click” because it can be clicked! The click is replaced by a subtle vibration every time you ”press” the new Home Button and many apps already use this ”buzz” to interact with iPhone 7 user!

Ok, iPhone 7 Home Button feels strange but I think I will get used to it. What I can’t accept is that you can no longer use the home button through cloth, like gloves!

If you also annoyed by the Home Button’s vibrations, you can turn them off from the iPhone 7 Settings!

iPhone headphone jack is removed as speculated since the beginning. Owning an iPhone 7 means that you have to buy Bluetooth Headphones and this can prove quite expensive when you want quality sound!

Apple claims that AirPods will solve this problem, but they aren’t available yet. (We will have to wait until late October for them)

Until then, in the box, you can find two wired solutions and as a bonus, a Lightning-to–3.5mm adapter, to plug in and use whatever analog headphones you like or already have.

The biggest drawback with the iPhone 7 missing Headphone Jack is that you can’t listen to music by using Headphones and charge your iPhone simultaneously because both of them require the Lightning port.

I already bought iPhone 7 and it is a good mobile. But after a few days using it the best things about it are both Front and Backside Camera and iPhone 7 speed and overall performance.
But I can’t stop thinking that iPhone 7 feels like iPhone 6s without a Headphone Jack and with a new Home Button. And it is truly frightening that they also look extremely look alike!
iPhone 7 is not the start of a new iPhone era and Apple admits that they weren’t ready for all the improvements they really wanted to make. This is why the kept the best parts for iPhone 8 and iPhone 8 will truly mark the new iPhone generation.
Of course, this iPhone 7 Review is my point of view and it is completely natural if you feel otherwise!
You are more than welcome to leave a comment below, with your impressions of iPhone 7