iPhone 5S Announced – A7 chip, New Sensor and much more!

The next iPhone 5S we were all waited is finally announced by Apple yesterday, and the majority of the rumors did not come true, in fact they were “poor” in imagination! Before the iPhone 5S announcement, Apple presented their new low-cost alternative, the iPhone 5C. Do not get confused with their similarity (5C and 5S), because iPhone 5S will be by far the strongest smartphone among the older iPhones (and most likely from all smartphones in the market).

iPhone 5S will support three colors, Gold, Gray (Slate) and Silver, and it will consist of high quality materials (Aluminum). It will also be a pioneer, when it comes to its processor, because it will use the new A7 chip, which is the world’s first 64-bit mobile processor. iPhone 5S will not just be a simple upgrade, but it will be twice as fast as the iPhone 5 and it will support OpenGL ES 3.0. This means that the graphics will be x56 faster (This is extremely impressive!).

All iPhones (and all smartphones) have sensors built in, but iPhone 5S will come with an M7 chip. This chip is a motion co-processor that can measure Accelerometer, gyroscope and compass, which will enable the developers to create new generation applications.

Also, a new sensor will appear on iPhone 5S, the Touch ID, that will increase the security of your iPhone. It is a sensor that will be able to scan your fingerprint and allow you to access it!

All you have to do is wait until September 20, and Apple will start shipping their new iPhone 5S to US, China, UK, Germany, Australia, Canada, Japan, France and Singapore. The prices will stay the same, $199 for the 16GB version, $299 for the 32GB version and $399 for the 64GB version. 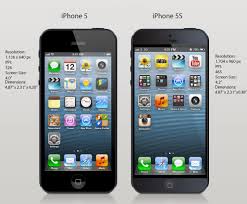