I fell on the Chimaera Device Policy issue around 2 years ago, when the same guy asked for our help and also opened a thread on Apple Community.

I bought an iPhone 7 online a couple of weeks ago. Checked before I bought it, it has no iCloud lock, no carrier lock, no sim lock nothing. Checked on Apple support page, it has a valid purchase date, valid warranty, valid tech support.

Everything looked ok but when I got the phone did an iOS restore and now it won’t activate. Was working fine before restoring it. Run an IMEI report and the only thing that I noticed not being right is under “Next Tether Activation Policy Description” it says “Chimaera Device Policy Applied”.

Apple support wasn’t much help figuring out what’s wrong with it. Anyone knows what this means and most importantly how can I fix it?Apple Community

Now, 2 years later, here’s everything I found on the subject.

If you take the time to read the thread you will find that there is no real answer as to what the Chimaera Device is really about. Well, it’s really amazing that there’s no response from Apple itself. I took the question a step further and contacted Apple Support without end. I also visited an Apple store, but the employees had no idea what I was talking about.

Actually, you won’t find an official answer on the internet so, I did my own research.

Who is facing the problem?

The vast majority is people who bought a used iPhone. Sometimes the iPhone is dead from day one but it can also happen after an iOS restore.

When you decide to go for a second hand iPhone it is always wise to IMEI Check it before the purchase to avoid issues like SIM Lock, Blacklist Status and iCloud Lock and as it seems Chimaera Device Policy.

However, there are cases where the problem started after a formal AppleCare device replacement. What strikes me is that, as users claim, Apple had sent them a Chimaera Device Policy iPhone but refused to send another one instead since the initial replacement was already done.

Finally, some claim that they bought the iPhone as new directly from an Apple Store but it was already “chimaerized” when they turned it on.

As soon as Chimaera Policy is applied, the iPhone is as good as a brick. Quite similar with iCloud Locked iPhones, you can’t access any app.

Is there a specific message on the screen?

While not absolutely certain, in many cases people reported they were stuck on the following “There is a problem with your iPhone” screen. 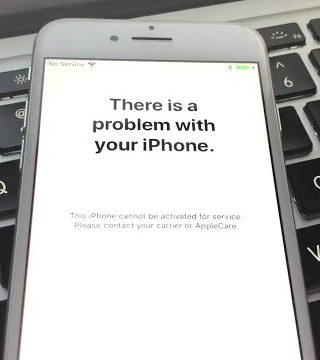 “This iPhone cannot be activated for service. Please contact your carrier or AppleCare”

What I have learned from various IMEI check reports 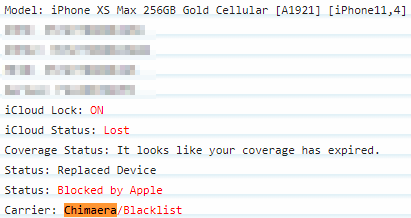 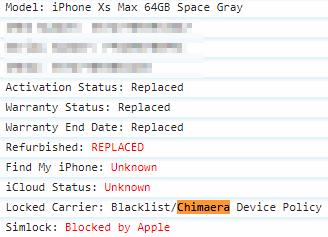 All of them are sharing 2 common factors:

In fact, the iPhone is blacklisted by Apple (quite rare but it can happen) and also SIM Locked in Apple which, until now, was impossible since Apple is not a Mobile Network.

But eventually, I started to see a certain pattern.

I’ve managed to talk to 2 high-rank Apple employees and that’s what they said about the issue.

Chimaera policy devices should not be in the hands of consumers and are not officially sold or issued through upgrade or replacement programs.

Apple will put an iPhone under Chimaera Device Policy when it’s stolen directly from a store, a warehouse or shipment. Moreover, another employee told me that these iPhones are also used as dummy devices for Apple stores.

And it all makes sense now!

Is there a way to unlock a Chimaera iPhone?

First of all, if you bought the iPhone as new from Apple or a Mobile Network or you were given a problematic device as a replacement, contact Apple Support immediately. Of course, you will need valid purchase proof as well as replacement documentation.

Depending on your paperwork, Apple will decide whether to provide support in 24 hours. However, it will probably take several weeks to receive a formal reply and honestly, I don’t know if anyone has managed to unlock a Chimaera iPhone so far.

If you bought a used iPhone then Apple Support is not an option. As far as I know, there are no 3rd party unlock services for Chimaera policy.

I have contacted iPhoneUnlock.Zone, one of the most reliable iPhone Unlock Providers and unfortunately, they confirmed the above. They are still trying to find a solution and right now you can only sign up in order to be one of the first in the order of priority when and if they manage to develop a relevant service.

Tell us about your experiences in the comments below and shed some light on this dire situation.